Healing Properties of Stones and Crystals

Calcite gets its name from "chalix" the Greek word for lime. There are said to be more than 300 crystal forms of calcite and these can combine to produce a thousand or more different crystal variations. Calcite is also the primary mineral component in such cave formations as stalactites and stalagmites.

Calcite can be found in a number of colors including white or colorless, green, yellow, orange, blue, pink brown, red, black and gray. Calcite crystals are often used as healing stones and some information about this use is given below.

Healing uses: Calcite is credited with the ability to concentrate energy and release it in intensified form, thus it is believed to be an excellent stone for those involved in the healing professions. Many who work with Calcite believe that old, rigid thoughts and emotions may manifest as bone issues in the body, thus they find calcite useful for constrictions of ligaments and muscles as well as for working with arthritis and joint issues. It is also a good choice for Reiki and distance healing work, because it amplifies the energy being sent.

Mental/emotional uses: Calcite is a peaceful stone and is considered one of the most gentle healing stones. It is also often called the "stone of the mind" and believed to provide supportive energies during times of mental changes or big transitions. Green calcite has a mild vibration that facilitates calm and relaxation, balancing the emotions and is an excellent tool for bringing tranquility to the emotional body.

Metaphysical beliefs: It is believed that the purifying energy of calcite cleans out stored negative energy from a room, the body, etc. Use calcite to clear out old energy patterns and to increase personal motivation and drive. It is considered to be beneficial to keep around the home or in the garden as it creates a peaceful atmosphere. Green calcite is often called the money stone. It is said to return two-fold anything that you give. Because of this, green calcite has also been called a "money magnet" or "prosperity stone."

Additional information on color - Each color of calcite is credited with helping to support other healing properties as noted below:

Calcite can be carried in pocket or medicine bag, and is frequently incorporated into jewelry items.

The name epidote is from the Greek epi, meaning "over," and didonai, meaning "to give." The name was originally intended to describe the enlargement of one side of the crystal in certain specimens. Epidote ranges in color from green to brown and black and is believed to have a simple grounding and "back to the Earth" vibration.

In folklore, epidote is said to be a stone of increase. It therefore has a tendency to increase anything it touches, whether the thing it touches is energy or a material object. It is believed to be a powerful healing stone by itself or as an inclusion in quartz or other stones; it is thought to increase their healing virtues.

Medicinally, epidote is thought to stimulate the immune system and improve overall physical well being, thereby strengthening over-all health. Some feel epidote can be used as a digestive aid, especially for those who have a hard time assimilating food intake and to help heal intestinal blockages due to nervous disorders affecting the stomach. Epidote is also believed to help with regeneration and recovery following illness, exhaustion due to stress, and past trauma.

Emotionally, epidote is thought to promote patience, cleanse old, repressed and stimulate perception and personal power. It is believed to "dissolve" sadness or sorrow, self-pity, grief, and is thought to dispel critical tendencies and closed-mindedness.

Thoughts for its use around horses would include those recovering from injury or illness, including muscular and joint problems, horses with ulcers or digestive problems, hard-keepers, horses in high stress situations such as showing, trailering, etc., and those suffering from past traumas. Don't forget that epidote, as well as other healing stones, are believed share their beneficial attributes with the healer as well!

Epidote can be carried in pocket, purse, or medicine bag, or can be worn in jewelery in combination with small quartz crystals or other stones. 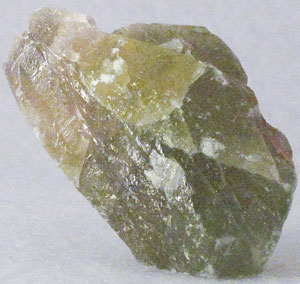